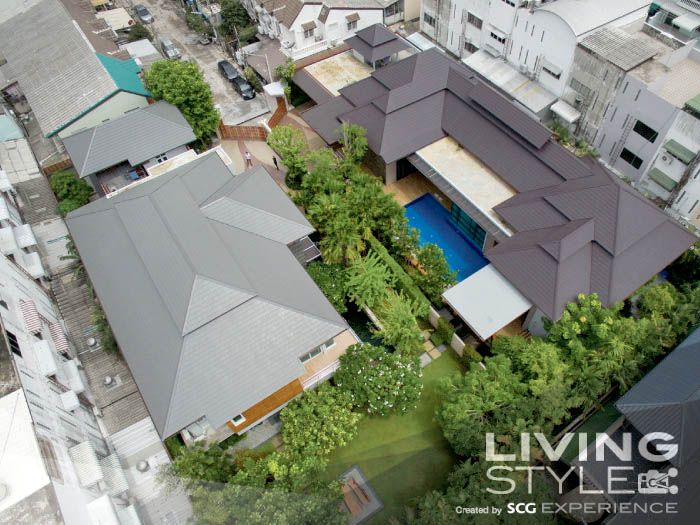 According to the Thai way of living as Filipino living alike, it is common that there are many family members in the household; however, they still want the privacy like modern urban lifestyle. Many families have houses built within the same gate or have gates adjoined to each other. Mrs. Pornthip and Mr. Sinthu Lorsithong’s house, for example, has two houses within the same area. The two houses share the same land of 600 square meters. The houses are separated by gates but are connected with an adjoining door as a style of a big family. 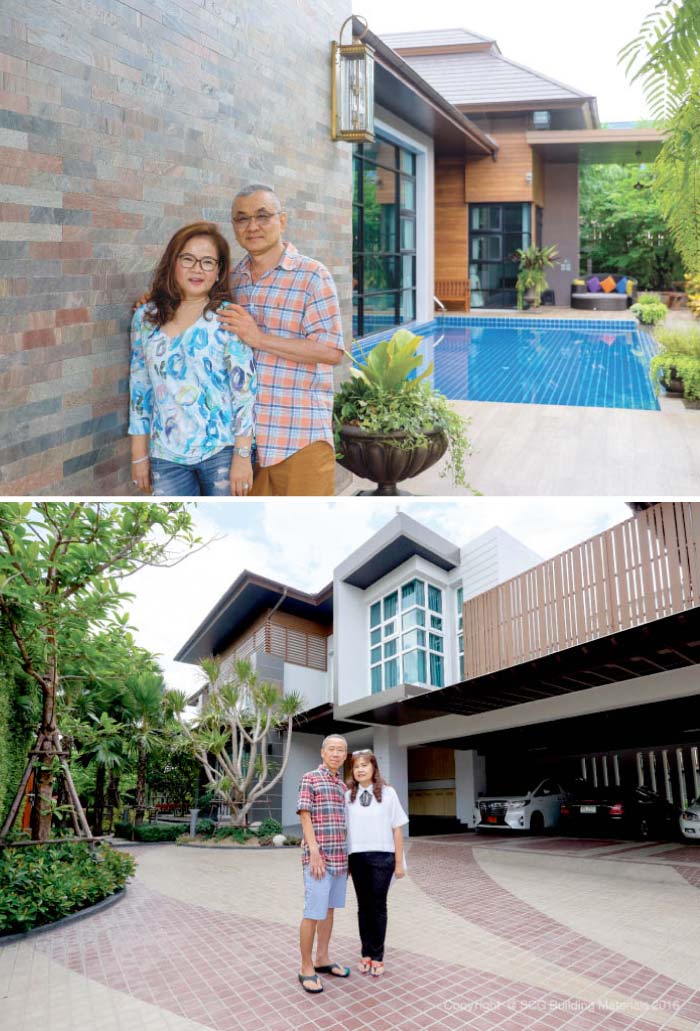 The mutual concept for these two houses are relaxation and privacy as if they are in another world. The first house is a single-storey house. It gives a resort vibe, including activity room such as yoga room, Thai massage room and a spa room, which is connected to a vegetable garden and a swimming pool. The second house is more modern and functional. There is a hall outside next to a garden and a long carp fish pond. 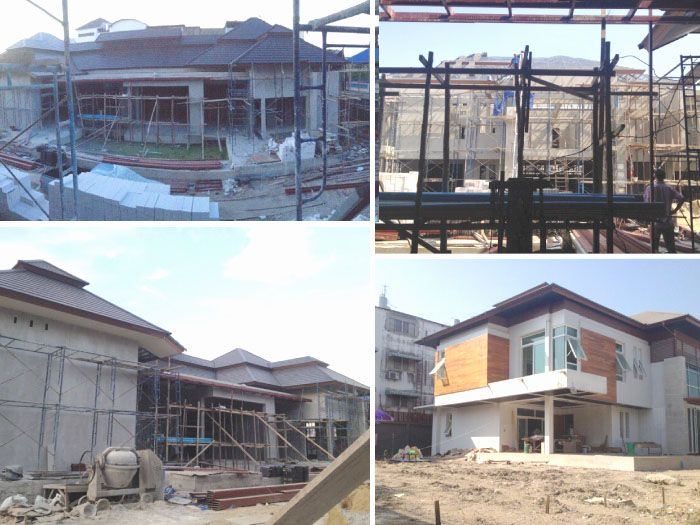 Let’s start off with the first house. Mrs. Pornthip Lorsithong, the house owner, recalled the concept at the initial design. Being a traveler, she had visited many resorts so she wants her home to have the same relaxing vibe as if she were in a resort. The house was designed to be a single-storey with high ceiling, opening to wide scenery of swimming pool, vegetable garden and along with activity rooms - including spa room, Thai massage room, yoga room and karaoke room. Initially, the architect planned to place the bedroom next to the swimming pool. However, due to Feng Shui, the bedroom was moved to the back while the karaoke room and spa room were moved next to the swimming pool instead.

Each corner inside and outside the house decorated in resort style 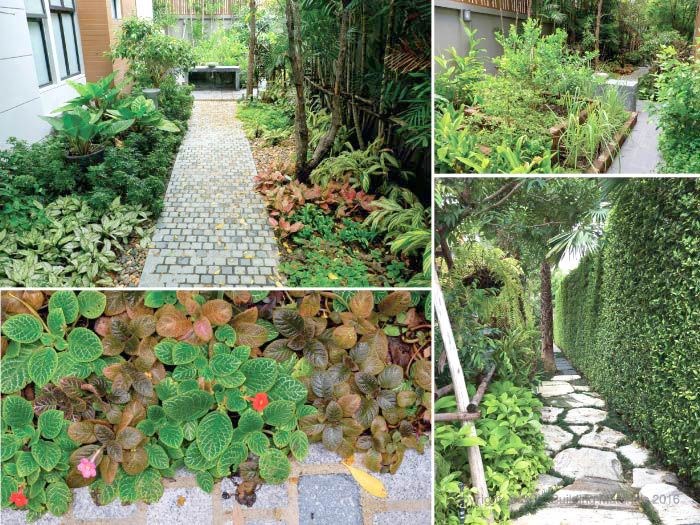 Ornamental plant garden and vegetable garden next to the house

Pornthip chose most of the materials and movable furniture herself. For the tiles in the swimming pool area, she picked wood look tiles. The first draft of the roof was meant to be a flat slab, but was changed to hip later on. She selected brown plain concrete tiles which gives the resort-like feeling according to the house concept. 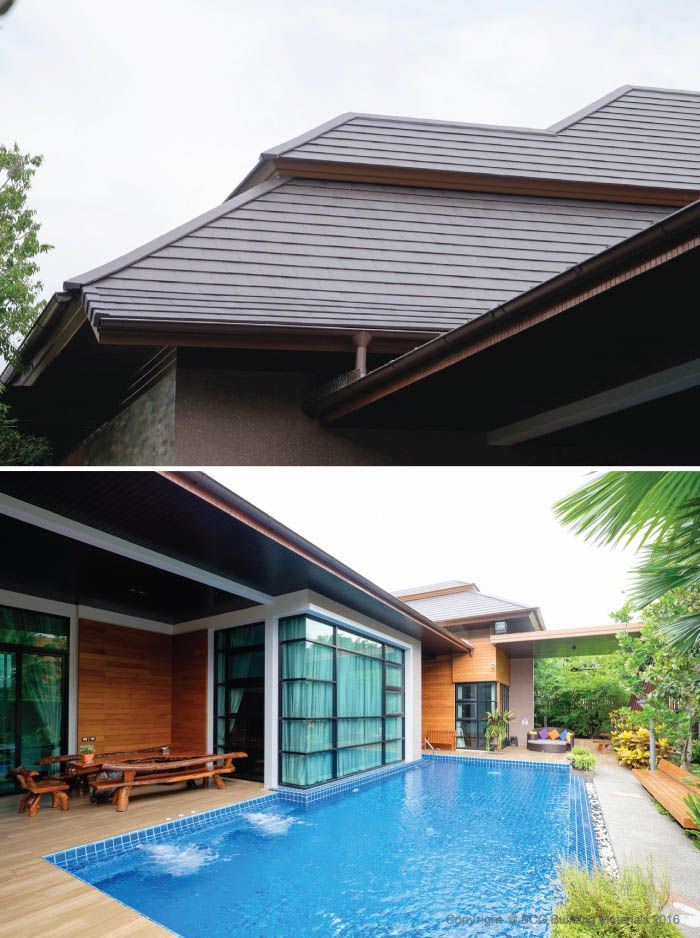 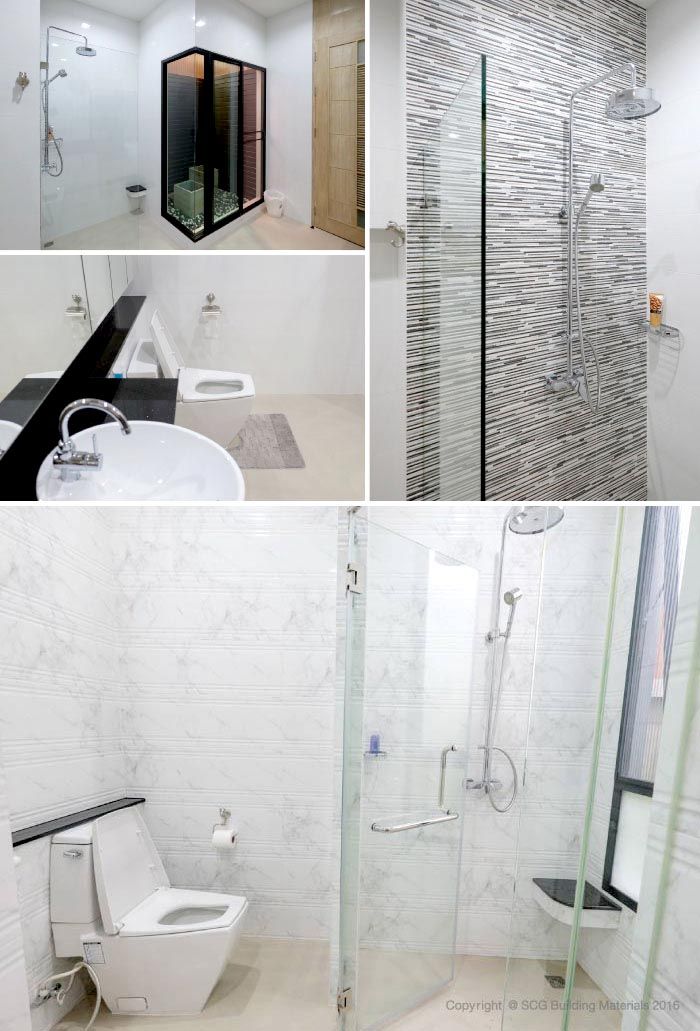 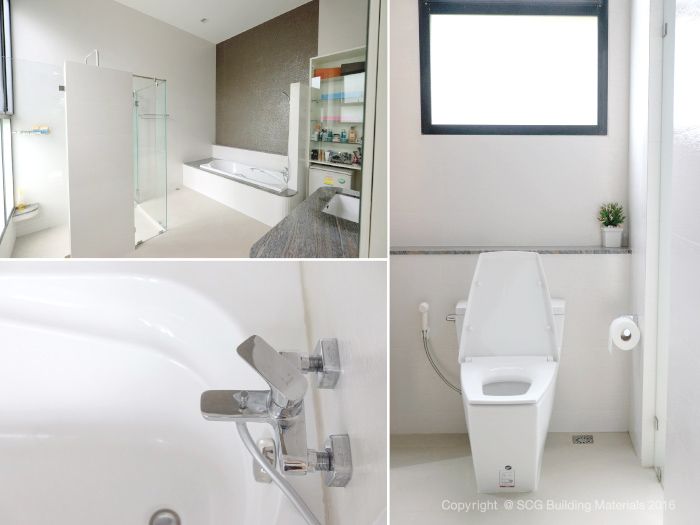 The bathroom next to master bedroom, simple decorated, air ventilated, and natural light from outside.

After enjoying the resort atmosphere, let’s change the mood to the second house with different design concept. Mr. Sinthu Lorsithong, the house owner, said he focused on functional benefits as first priority, so Feng Shui was not much of a concern. The plan was actually roughly sketched even before the architect took over. 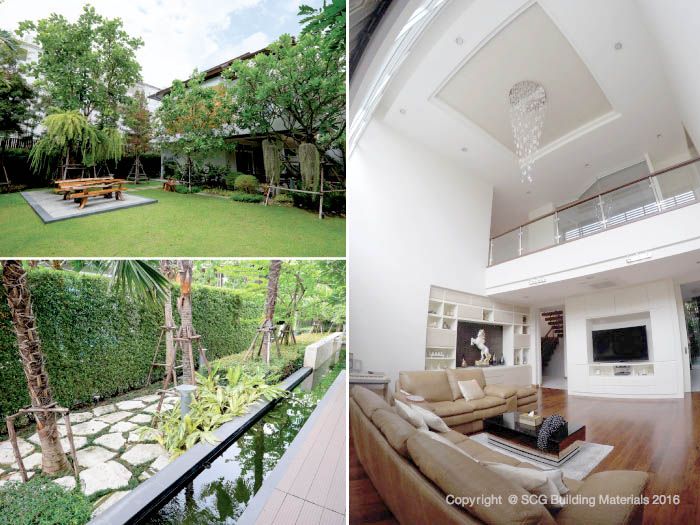 Atmosphere inside and outside the house

The reason why it is a two-storey house is because the house owner wanted enough space for all family members. The space was mainly divided based on users’ functional demands - dining room, bedroom, living room, office, prayer room, and luggage storage. There are also many built-in cabinets and drawers to keep the place clean and tidy. Outside the house, Sinthu would like a lobby next to the carp fish pond to serve as a place for recreation, guest reception and activities, as well as private garden and lawn for walking instead of traveling to a public park. 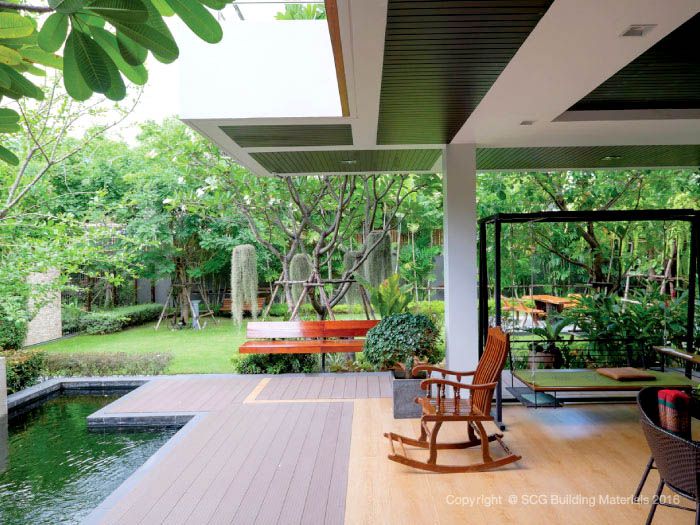 Front lobby next to the garden and carp fish pond

Sinthu and his wife selected materials and furniture themselves as well. They chose plain concrete roof tiles, the same in Pornthip’s house, in grey tone which appears to be more modern. All doors and windows are vinyl frames, which can prevent noise from outside to leak in. Sinthu and his wife confirmed that this material can really reduce noise even during heavy rain. 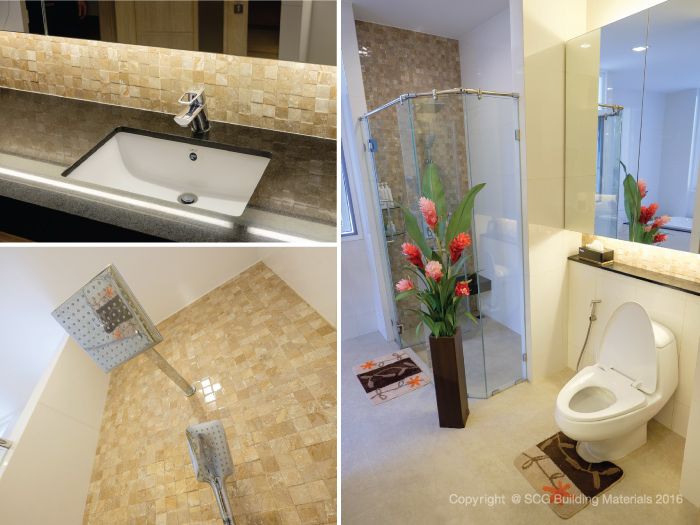 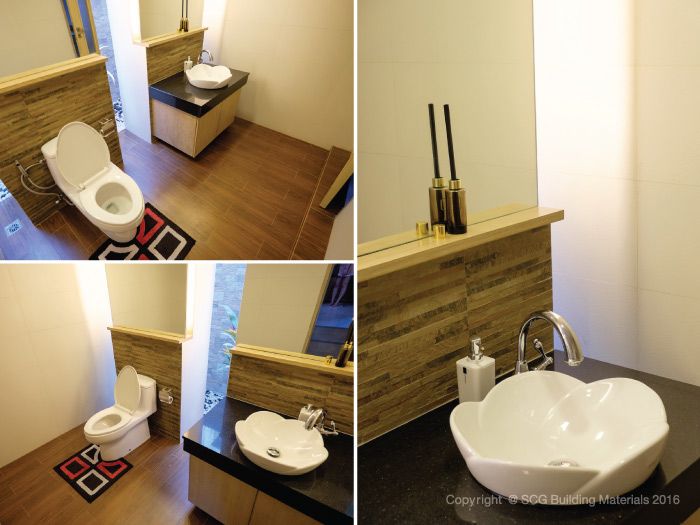 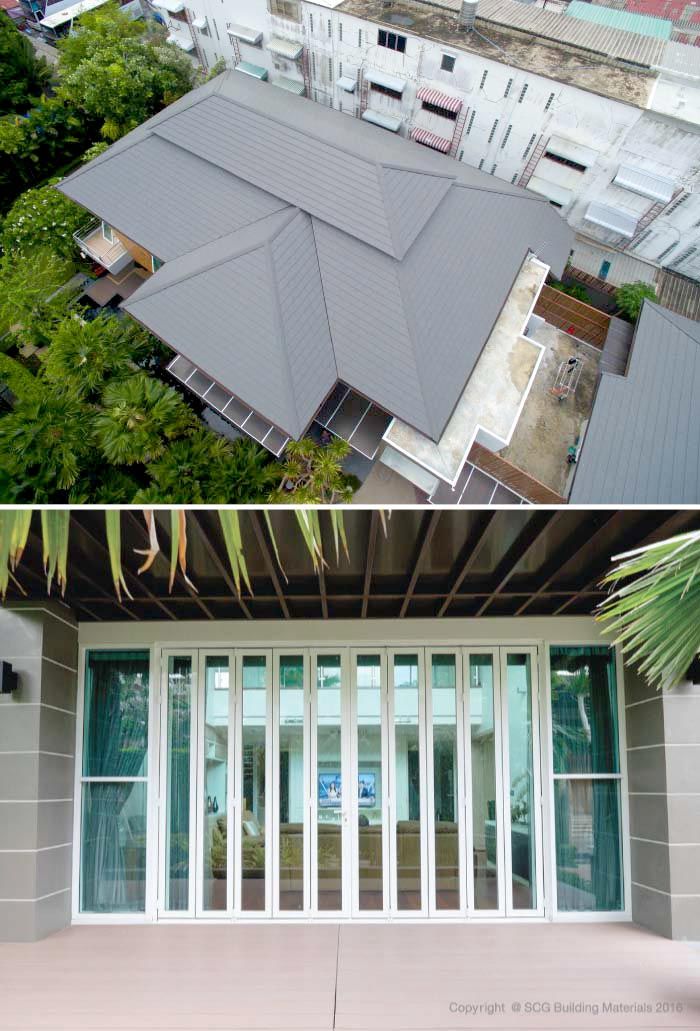 Lastly, the proverb ‘build a house however the residents like’ can be applied in every era. Like these two houses, the owners want to create a private place with full facility, as comfortable as a renowned resort. It goes along well with their lifestyle and can be considered the most perfect house for them.

10 October 2022
Home Renovation Tips on a Small Budget
Home renovation is usually associated as an expensive task, but revamping your home doesn’t mean you have to break the bank!

15 July 2022
5 Tips Before Building A House
It is normal to feel anxious when you're building a home, so we've listed down a few tips to know before you get started!

04 August 2022
How to Choose Quality Tiles
Advices from Mariwasa, trusted brand for tiles with Uncompromising Quality.

09 December 2021
Design Your Wall with the Use of Cement
Unleash your creativity to improve the look of your home that guests will adore.

25 November 2022
13 Things Worth Spending With Your 13th Month Pay
The anticipated 13th month is on its way, and that means it's time to spend on your must-haves!
We use cookies to enhance your experience, analyze our traffic, and for security and marketing. By visiting our website you agree to our use of cookies. Cookies Policy